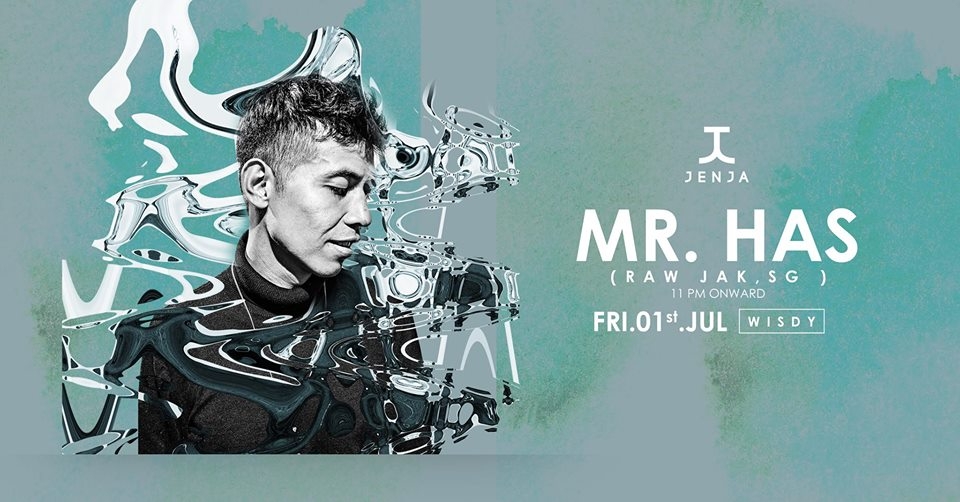 Mr. Has is a Singaporean DJ/producer and the current Asia Pacific Music Director for W Hotels. Last time he played together with Scarlett Etienne. And now he is back for another round of fun.

While keeping his finger on the pulse of music, fashion and design. Of these, Mr. Has has first-hand experience as one of Singapore's key figures in the electronic music scene and whose work has introduced underground and cutting-edge club sounds into the island's nightlife scene. Beyond Singapore, his genre-bending sets have also gained traction on international stages: from Bali to Puerto Rico, New York to Berlin, London to Ibiza, he has spun at reputable clubs & parties around the world.

Prior to this Mr. Has had a four-year stint as the Music Director for the Lo & Behold Group from 2008, overseeing their repertoire of bars and restaurants, including The White Rabbit, OverEasy, Loof and Tanjong Beach Club. He was responsible for curating parties and introducing local debuts of international names such as Mayor Hawthorne and Holy Ghost!. He also conceptualized the very successful 'Full Steam Ahead' party series that featured only all-star local DJ lineups, pushing the island's musically talent.

Mr. Has won the inaugural Nike Street Style Music Awards in 2001, paving the way for his exclusive club nights at Phuture (Zouk) from 2003 to 2005 where he championed an eclectic sound that redefined the island's club culture. He was awarded Best DJ twice in JUICE Magazine's annual polls - Singapore's chief nightlife voice.

Known for his ineffable style, Mr. Has has worked with fashion houses like Prada & Dior and is also on Mr Porter's Style Council, a gathering of the world's most stylish and connected men, some of which include Hugh Jackman and Pharrell Williams.

Mr. Has runs his own digital label, Rawjak, promoting local and international electronic artists. It is a platform to roll out a monthly podcast, and to release his debut album Ten Kingdoms in 2010, which won him JUICE Magazine's Best Electronic Music Producer award. He can also be heard on Lush 99.5FM on its bi-monthly Lush Mix programme.

Outside of the W, Mr. Has can be heard at select underground parties and continues to push the boundaries of the electronic dance scene.

Bottles of Belvedere are chilled and only 1,5 Mil nett and EVERY NIGHT IS LADIES NIGHT; Buy one get one FREE on selected cocktails, all before 11 PM.