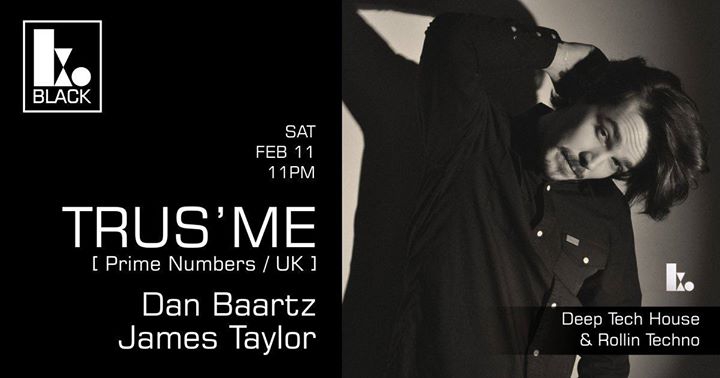 Koh.BLACK - Your Weekly Dose of Deep Tech House & Rollin' Techno, this week welcomes back TRUS'ME to the bunker. After laying down an absolute belter of a set last year, we can't wait to see what he's got in store this time round!

It all began in the studio for Trus’me. His early productions had a habit of selling out at record stores from Manchester to Tokyo focusing on the deeper, soul and disco-tinged aspects of House. Not one to rest on his laurels, he set up his own label Prime Numbers and it quickly gained a reputation for highly collectable and exceptional music from artistes such as Move D, Actress, Linkwood, Fudge Fingas, Motorcity Drum Ensemble.

In 2009, his highly anticipated follow up album, “In The Red” which featured ‘live’ further cemented his place in the House music scene and set off a flurry remixes for acts such as LCD Soundsystem, Motor City Drum Ensemble, Alton Miller, Anthony Shake Shakir and more.

His third and most talked-about album to date, 'Treat Me Right’ saw his sound mature. Lauded by a gamut of the most respected DJs including Ben Klock, Guy Gerber, tINI and Maya Jane Coles, his club-focused tracks Somebody’ and ‘I Want You’ have received both heavy rotation and wide publicity across Resident Advisor Fact Mag, Groove, DJ Broadcast.

Want to run your own
My Guide website?
Find Out More

We are now in 100+ Destinations and Growing. If you are interested in becoming a local travel partner and would like to find out more then click for more info about our Website Business Opportunity.