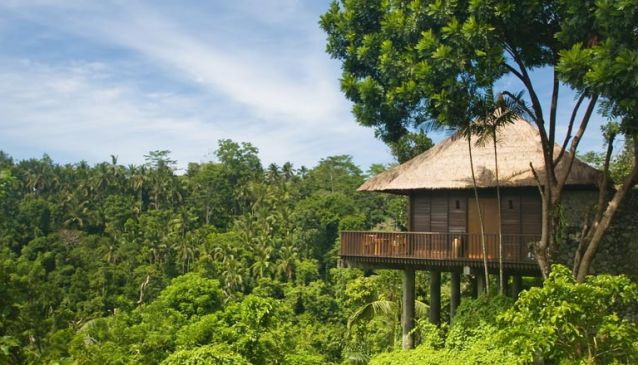 Situated way above the Ayung River, Alila Ubud has been planned like a Balinese hillside village complete with its own community centre and pedestrian lanes. The resort's rooms and villas stand above a ravine on stilts like tree houses and are set into the banks of the river valley. Kerry Hill Architects makes use of traditional Balinese design, but transformed it into modern geometry. Smooth plaster walls and concrete meet thatched roofs; terrazzo tiles meet gravel or crushed rock; wood meets glass.

A BIT ABOUT UBUD - Ubud became a Dutch protectorate in 1900 at its own request and has become a centre for traditional arts and culture. In the 1930s, when foreign artists were encouraged by the royal family to take up residence in the town, Ubud became a base for artists like Walter Spies and Rudolph Bonnet, who were prime movers in promoting an understanding of Balinese art and cultural heritage worldwide. From the 1960s onwards, earnest travellers began to arrive in droves, drawn by the hive of creative energy. Since then, Ubud has developed into a world-class international destination while still maintaining its integrity as the centre of Balinese art and culture.

Alila Ubud, in the traditional Balinese hill village of Payangan and on the banks of the mystical Ayung River, is just five kilometres from Bali's artistic centre of Ubud, the place where artists, painters, writers and musicians from around the world have long found inspiration. Here, guests can visit a number of art galleries and museums, see dramatic and opulent temple festivals and dances, and take in the magic of the real Bali. The hills and valleys surrounding Alila Ubud contain a number of traditional villages and family compounds as well as some of the most spectacular scenery on the island.