Two of the driest places in Bali are the Bukit Peninsula, south of the Bali Ngurah Rai International Airport, and the Regency (sub-province) of Karengasem in the north-east. Most people accept that the welcome rainy season starts in October but this year has seen only a few spits and showers so far.

However, the people of Karengasem don’t just sit and wait for the rain. In what has become one of the cultural attractions of Gebug Ende at Taman Ujung, Karangasem, young men beat at each other with  rattan canes while onlookers cheer them on. The Rattan War is a sacred art from the village of Seraya, Karangasem Regency, which is usually only held to invoke rain in the dry season. It has been dry for many months.

Karangasem covers an area of 839.54 km2 and has a population of 369,320. Its Regency seat is Amlapura. Karangasem Regency was formerly a kingdom before Bali was conquered by the Dutch.

The Regency was devastated when the towering Mount Agung erupted in 1963, killing 1900 people. Gunung Agung the island's tallest and most revered volcano, had been dormant for a century. Many villages were obliterated and many antiquities lost for ever. Evidence of this cataclysm can still be found along the Regency's north-east slopes, where volcanic boulders litter the countryside.

The Puri Agung Kanginan palace features a blend of Balinese, Dutch, and Chinese architecture. To the south are the ruins of the "Taman Sukasada Ujung" pleasure palace. Another water palace to visit near Amlapura is Tirta Ganga, once the pleasure palace of local rulers, now superbly restored and offering relaxing holidays. 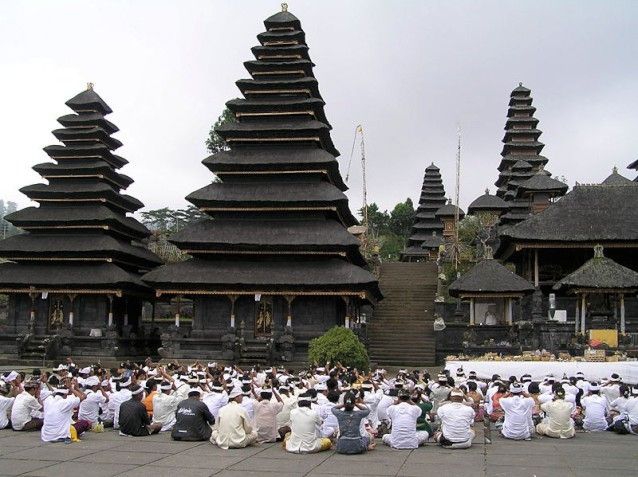 On Karangasem's south coast, 16 km past Padangbai ferry terminal, and the exit port for “fast boats” to Lombok, the small fishing village of Candidasa boasts a decent number of restaurants, hotels, holiday villas and even discos. Despite the erosion of her beaches, Candidasa remains a beautiful vacation spot. A sight to look out for is the village pond, usually covered in water lilies.

The diving in this area can be good and a couple of exclusive resorts offer idyllic seclusion from the better-travelled parts of the island.  Favourite dive is a shipwreck, USS Liberty, at Tulamben. There is also plenty to see in the clear waters off Amed, where underwater photographers have recorded many    species of nudibranches and other marine life in recent years. Near Padangbai is Bloo Lagoon, with its own boat and diving equipment.

Nearby villages of Dauh Tukad, Bungaya, Asak, Timbrah, Perasi, Bugbug, Jasi, Ababi, Seraya, Sengkidu, Ngis, Bebandem and Padangkerta observe colourful rituals with ceremonial dances for men and women, and spectacular offerings are made at the temples. Most notable is the “Mother Temple” of Besakih on the slopes of Gunung Agung.  Mount Agung should only be climbed by experienced hikers with a guide. It is presently closed to hikers, for Hindu ceremonies, until 21st November. 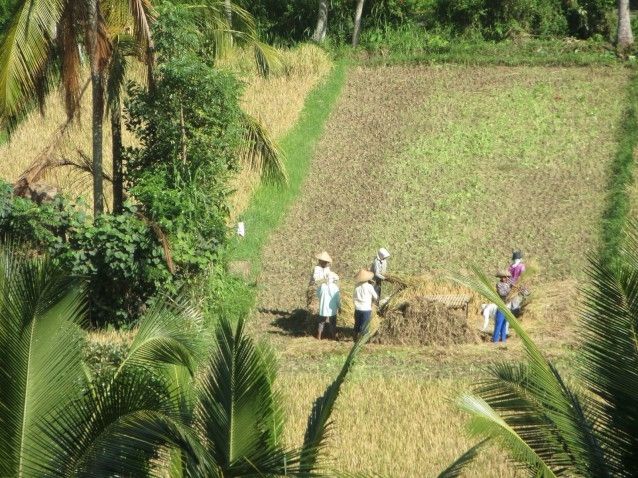 The Bali Aga or Bali Mula are the original Balinese people, predominantly located in this eastern part of the island. The original inhabitants of Bali are said to have arrived long before the Hindu-Javanese immigration wave. The Bali Aga speak a dialect of the Balinese language dating back thousands of years. It varies from village to village, where the sub-dialect spoken in the Tenganan village is different from that in the Trunyan village.

An important part of Bali Aga culture is the unique weaving skills found especially in the Tenganan village, called geringsing. Geringsing consists of an intricate ikat technique, where patterns are applied in such a way that it only appears when completed. The geringsing threads are dyed and cross-dyed until they achieve a colour that is unique to the region. The villagers believe the geringsing to be sacred because of its ability to drive away bad spirits, or black magic. Gering means decease and sing means no. Tenganan is the only place in Indonesia where double ikat gringsing cloth is woven.

Get off the main roads and you will find winding mountain passes through salak (snakeskin) and other fruit farms and terraced hills leading to Sidemen, one of the most beautiful yet seldom visited parts of Bali, where the people eagerly await the new rainy season.. 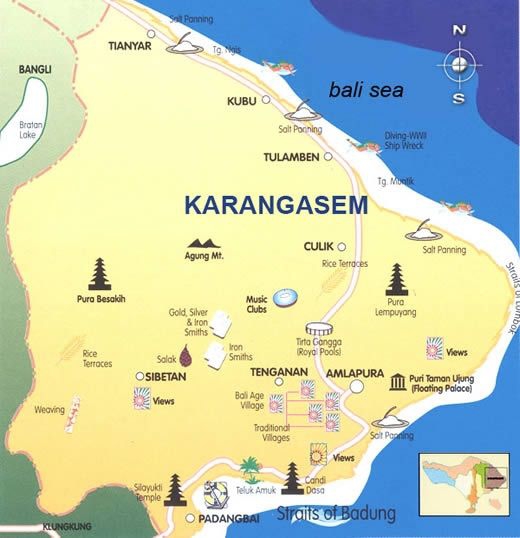