This Christmas on Bali sees 3 overlapping Festivals from 3 distinct groups.

Christmas comes but once a year, and ’tis the time to be jolly. This Christmas on Bali sees 3 overlapping Festivals from 3 distinct groups. Now you know that Christmas is celebrated on 24th of December with Carols sung in Christian and Catholic churches and other venues where the public gather to celebrate the birth of Jesus Christ. Christmas decorations appear in hotels, restaurants and shops, arguably more colourful than any other festival except Chinese New Year in Singapore.

Visitors to Bali can be forgiven for thinking that the Balinese have gone overboard to assist Christians with celebrating Christmas this year. There will be penjors and other colourful decorations at temples and private home all over the island. Adorned with fruit, flowers and coconut leaves, these tall poles are found on every highway and byway outside virtually every Balinese home, often creating overhanging arches that turn most streets into “avenues”. Just like with Christmas decorations, Christmas trees and other reminders of “The Festive Season”, the purveyors of Balinese decorations are having a field day.

Here’s the reason; Two consecutive Balinese feasts, Galungan and Kuningan occur on 17th and 27th December this year-end. You may well be saying: “But they already had G & K this year”, and you will be quite correct. In the Balinese Calendar, these feasts occur every 210 days and Galungan fever hits Bali twice in some years.

Galungan is a unique 10-day celebration commemorating good over evil in typically Bali Hindu style. Balinese mythology is colorful to say the least and the story behind Galungan takes it to a whole new level. During Galungan the Godly spirits return to earth and expect to be welcomed and entertained with important Balinese rituals and extravagant feasts. From a visitor-to-Bali point of view, Galungan is second only for sheer spectacle to the Nyepi “Day of Silence”. 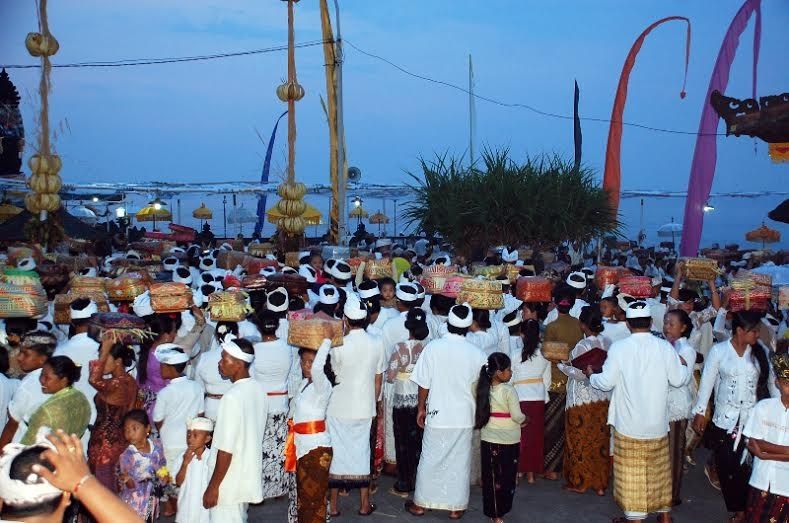 Kuningan is the final day of the festival which brings proceedings to a close. It is all a very organised occasion where every member of the household has specific tasks to perform and dressed in their “Bali Best” finery. The ladies wear their best kibayas over colourful tops and equally colourful kamen (sarong) and the men are not to be outdone, seen in their best kamben surang as well, with quite new udeng -headdress - on most, the priests standing out in their white clothes and white udeng.

The preceding days are all full of feverish activity – cooking, cleaning and making offerings. You’ll see the roads filled with convoys of scooters ferrying neatly dressed worshippers to and from temples carrying huge baskets of fruit, flowers or even live chickens, either on laps of ladies riding side-saddle on hubby’s scooter or aloft on their heads, and I have never heard of one falling off a scooter!

The day before Galungan, men of the village head out at dawn in search of an unsuspecting pig which is to become the temple sacrifice. The meat is used to make traditional spicy “lawar” dishes containing satay, jackfruit, dozens of herbs and spices and always enough to feed more than a family.

Pecalang (Temple Police) erect road blocks outside main temples and even block off streets as waves of worshippers flood the area, adding to the traffic chaos that is part of Bali life

On Galungan day itself, which is always on a Wednesday, it’s a time for families; your favorite barman or the girl who cleans your hotel room each morning is suddenly not there. They will have headed home to the ancestral village at dawn to spend time with the family. After a full day of prayers, some family “quarrels” and non-stop eating, it’s back to relative normality with perhaps a family picnic in the paddy fields. Villages throughout the island celebrate the Galungan period in their own peculiar way.

Ubud is flooded with schoolchildren performing “Barong” dances with great enthusiasm while in Klungkung on the east coast, a number of villages indulge in frenzied “Jempana” war games with long bamboo sticks to the sound of monotonous drumming. There is also the bizarre ritual of a village elder seemingly “stabbing” himself with a ceremonial kris while in a trance-like state. Curious onlookers are always welcome at these occasions but expect to be the subject of giggling amongst children as your “bule” clothes and skin will stick out like the proverbial “sore thumb”. Enjoy it all; nothing is done with malice.

Overlapping all this, the small Jewish community of Bali will be celebrating the Festival of Lights known as Hannukah. Hanukkah 2014 begins in the evening of Tuesday, December 16th and ends in the evening of  Wednesday, December 24th. You may see it written as Chanukah or Chanukkah, Feast of Dedication, an eight-day holiday commemorating the rededication of the Second Temple in Jerusalem at the time of the Maccabean Revolt against the Seleucid Empire of the 2nd century BC.

The festival is observed by the kindling of the lights of a unique candelabrum, the nine-branched menorah, one additional light on each night of the holiday, progressing to eight plus the middle one on the final night. This symbolism commemorates the miracle of the small amount of lamp oil which lasted 8 days until new lamp oil could be prepared. Other Hanukkah festivities include playing dreidel and eating fried foods such as doughnuts and latkes.

And then there’s Christmas Day on 25th. This has just got to be one of the most religiously tolerant places on earth, this beloved Bali.