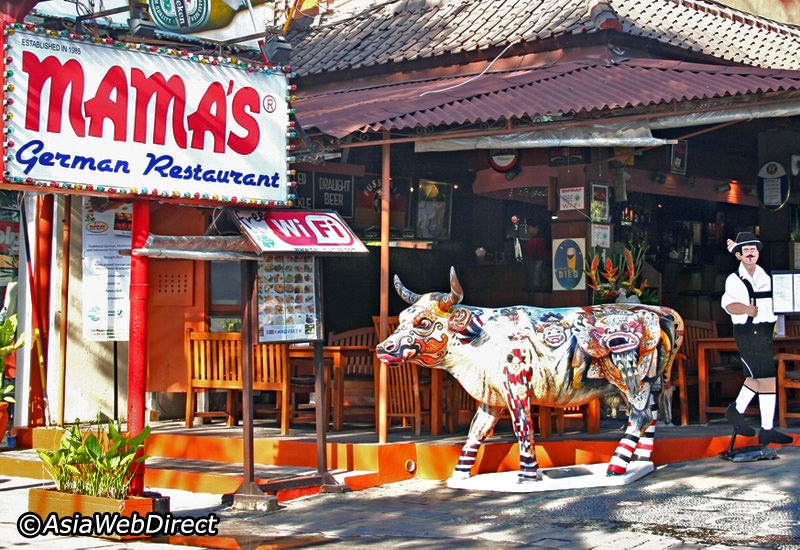 Operating as a #German-style bar and restaurant  since 1985, Mama's is a hangout for  travellers  from all over the world, mainly Austrians, Swiss, Germans,  Australians, but also Indonesians are  enjoying the atmosphere and friendship made here. In the days when  Bali's tourists were served Western food mainly in the form of Spaghetti and Pizza, #Mama's  started a new trend, serving  juicy real hamburgers (the owner hails from Hamburg, Germany) and hot dogs, with a decent portion of French fries. Soon original German style dishes were on the menu, such as: Roast Pork (Schweinebraten), Vienna Schnitzel, Rolled Beef (Roulade) with Red Cabbage (Rotkol)  and Bread Dumplings, all made at Mama's under the supervision of German Chefs.

Nowadays the choice includes many other wurst (sausages), Frikadellen (German meat balls), spit-roast chicken, pork roast, Rouladen (German beef rolls), and huge pork knuckles (Eisbein). To add to local draft beer, imported beers and German schnapps are also on tap, as well as a limited wine list. Diners may sit at the large tables and a bar downstairs or on the upper floor where there is a billiards table, and live music in the evening. Many tables are in true German size, 10 seaters for 'gemütlichheid'. Open 24-hours a day and 7 days a week.

The German Executive Chef and his crew prepare authentic #German, #European and #Indonesian #dishes in a nice atmosphere in the 'Dining Club' upstairs with a special Cocktail Bar. The area is ideal for private dinners, either just for two or for celebrations.