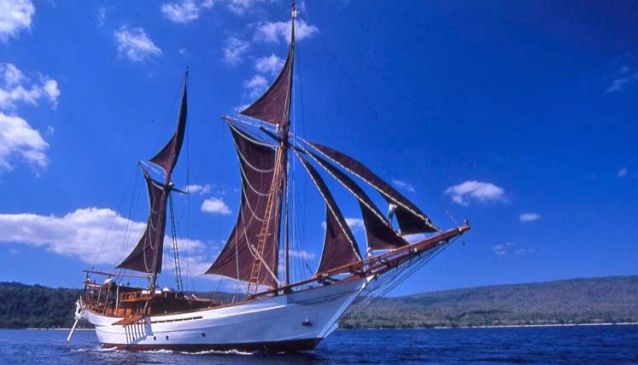 Silolona and Si Datu Bua (Beloved Princess) are modern images of those glorious traditional Indonesian sailing ships originally built for trading along the historic Spice Island routes. Luxuriously combining all the safety and amenities of the 21st century with the style and grace of ages past, each schooner was meticulously designed and hand crafted, specifically for the highly acclaimed Silolona Sojourns of Discovery.

Silolona Sojourns are the most sought after private travel experiences in South East Asia. These are individually crafted journeys, but also journeys crafted for each individual passenger to enjoy. Young or old, every adventurer is enthralled by these magical experiences.

The ancient Spice Islands enjoy an evocative history, conjuring romantic visions of majestic sailing ships, wealthy sultans and enigmatic jungle tribes whose culture and traditions have survived intact for thousands of years. Columbus, Magellan, and Francis Drake all sailed in search of the Spice Islands. For centuries before Europeans arrived in the area there was a vibrant trade between the spice islands and most of the known world. Great trading vessels regularly sailed as far as Africa, India, and China laden with their highly valued delicately scented cargos.

The Dutch East India Company (VOC) grew out of its riches, pursuing spices, nutmeg and pepper. For centuries the fabled spice trade was known for its land routes through Asia and the Middle East, until the Europeans arrived with their ships.

Silolona is a ship with a long tradition deeply rooted in this history. She is a living spirit from the golden age of sail. Built by hand in the traditional manner by the Konjo people of Sulawesi using exotic tropical iron woods, these majestic sailing ships have been sailed by the Bugis people for centuries.

In the 17th century the Dutch introduced new methods and rigs, including gaff sails, by building European style vessels in their Javanese shipyards. Soon Sulawesi sailors seeing how effective these new innovations were began to combine their big black rectangular sails with the fore-and-aft sails they saw on the locally built European ships.

Reports from the 1830's mention locally build vessels, both schooner and ketch rigged, with cloth sails rigged in imitation of the European manner. The Bugis people skilfully adapted what they saw to what worked best for their building materials, waters, and winds. The result was the magnificient sailing Phinisi.

MSV Silolona is a powerful hand crafted traditional wooden sailing vessel newly built from the finest tropical hardwoods to German Lloyds specifications by the Master Konjo boat builders of Sulawesi. This magnificent vessel melds the best of the traditional spice island sailing vessels with all of the modern amenities and safety features one would expect in a vessel of her quality.

Silolona sails in Indonesian waters from April to November every year, before departing up to the West Coast of Malaysia, Thailand and Myanmar, from December to March. You will have the choice of having a quiet beach and dive trip in the Andaman Sea and Komodo National Park or one of the most memorable cultural trips you can dream of, visiting the tribes of Irian Jaya (Papua), attending the Asmat Auction for their art, visiting the remote and rich Spice Islands and discovering the trade posts and beautiful islands visited during the height of the Spice Trade.